1981 Audi Quartz, was an amazing looking prototype car designed by Pininfarina house, which was presented at the International Motor Show in Geneva Switzerland in 1981.

The 1981 Audi Quartz, this was a prototype, which was presented at the International Motor Show in Geneva, in Switzerland, in 1981 by the hand of the Pininfarina house. To do this, the platform of the Audi Quattro permanent all-wheel drive car on all four wheels was used.

The German 1981 Audi Quartz car ran in several rallies managing to score many victories for the Audi house. The prototype was made to test a new material from that era: the Kevlar 49, which was a development of the Du Pont company, which in Argentina was known as Ducilo. The company that has the most patents for new technological developments since time immemorial.

This aramid fiber, Kevlar, had been applied in the industry for 10 years. For example, the helmets of the bodies of race cars were made. The interesting thing was that its low specific weight, 1.45 grams on cubic centimeters, made it an ideal material for building parts of a car.

It also had a high resistance to breakage, 3,617 N / mm2, so the Pininfarina company used it for the wide bumpers of the Audi Quartz. Plastic materials began to invade the bodies of cars, until reaching this 21st century with cars with plastic fenders.

“This prototype was a birthday present from Sergio Pininfarina to the Swiss automotive newspaper Automobil Revue on the occasion of 75th anniversary in 1980” – Source: Przemek Michalak

The most important thing today is to lower the weight of cars, which has been increased by a large number of accessories and technology that must be loaded in their bodies.

More weight means more fuel consumption and an increase in dead load. That is why a large number of lightweight materials, not metals or metals, used today. 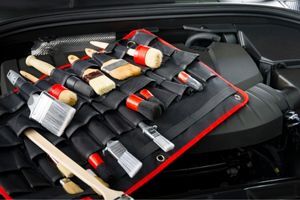 What Tools Do I Need To Detail My Car

With interior detailing, you don’t need a whole lot of tools. That’s what’s great about it. You just need a few brushes. I have a one-inch brush here. This is great for the vents. A little toothbrush for fine cracks and areas to get. I have a carpet brush. This will scrub the carpets. Leather brush. If you have leather seats.

More at our Post Must Have Car Detailing Tools

WIRELESS HOTSPOT WILL ATTACHED WITH 2011 AUDI A8 THETECHJOURNAL

Pinxcars.com brings you images of the coolest cars that have been ever made. This site was made with car lovers in mind. Your feedback as to what should be included on this site would be extremely appreciated. If you have any questions or comments please send us a message.
Contact us: [email protected]
© Copyright 2019 Pinxcars.com
4 Shares
Share
Pin4
Tweet
Share
Share